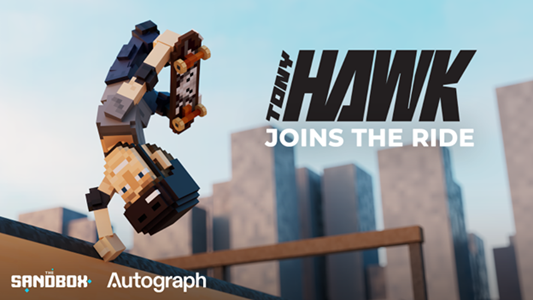 After conquering the X Games and video games now the legendary skater announced last weekend his partnership with The Sandbox to create the largest skate park in the metaverse, opening the doors to the last digital frontier for this innovative investor and athlete.

In partnership with Tony Hawk Inc, 6X6 LAND, the largest park in the metaverse, will feature interoperable NFTs including an avatar of Tony Hawk with his most legendary skateboards from the 1999 X Games modeled by Autograph, which will also allow users to experiment with their high-fidelity avatars, a special set of functions that will give the user an added value of utility that has not been seen before in the digital world.

“I have been a fan of new technology all of my life – from the first videogames and home computers with CGI capabilities – so I am fascinated by the metaverse, and excited to bring our culture into the virtual landscape of The Sandbox,” said the skater and businessman at a press conference.

Hawk is a legendary skater, entrepreneur, and founder of The Skateboard project, world champion for 12 consecutive years of skating, and an inaugural member of the hall of fame of the skating league, 2 is the personification of not giving up “in the words of Sebastian Bornet, Co-founder and COO of The Sandbox.

Part real estate investment and part amusement park, The Sandbox sees the metaverse as a shared digital space where the world collides and magic happens, the partnership with Tony Hawk is one of the company’s more than 300 development partnerships in the Metaverse in conjunction with Atari, Adidas, Snoop Dogg, Steve Aoki, The Walking Dead, among others.